This page is dedicated to some of the silly songs and games that I like to play with the boy-o. He loves singing and anything that involves singing really! He even tries to sing along himself sometimes. These songs usually work best repeated a second time so that baby knows what's coming and gets excited about it. I've tried to provide a written description of each of the song's actions along with the words, but I've also included a video for each song in order to make the tune and timing a bit clearer. Now get bouncing and have some fun!! 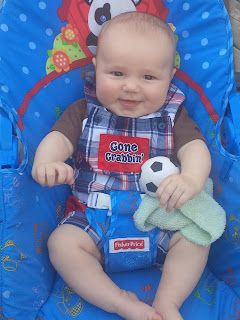 Bouncing/Movement Songs: These songs are great once your baby has a little bit of head control and won't go flopping away on you! As they get older you can of course increase the level of bumping to keep it fun for older children too.

"The Grand Old Duke of York"

Repeat the appropriate action three times to correspond to the words of the song.