Our Journey With Milk: From Intolerance to Cereal for Breakfast!

Ever since the boy-o was born we've had an ongoing battle with milk. When I was nursing him I couldn't eat cereal with milk because it would bother him, so I pretty well gave up eating/drinking milk and just recently with pregnancy #2 have I started eating cereal with milk again.

The troubles with milk for the boy-o didn't end with me drinking milk though. Once he turned a year old we tried to introduce homo milk to him and he had a horrible reaction to it. It was pretty clear that milk wasn't going to work for now so we switched him to the toddler version of our formula instead which was rated up to 24 months. 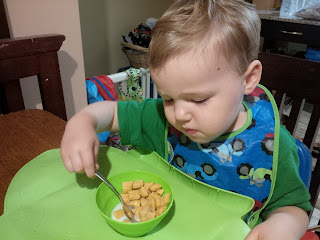 We tried introducing homo milk to him again when he was around 18 months, and the same thing happened. He only got a tiny bit mixed in with his regular formula, and it was a nightmare. He had another horrible reaction and I felt like a totally terrible mother for putting him through it again.

Fast forward to the boy-o's 2nd birthday which is as far as his formula was rated. It was time to try the milk again as nervous as we were about it. We had heard many times before that kids grow out of it, and so far that hadn't been our experience but we were hopeful this time it would really be the case. 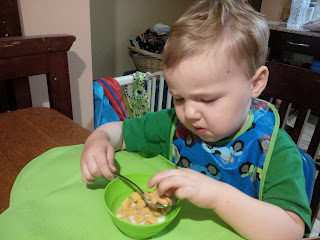 The funny thing is that the boy-o has always been ok eating cheese and youghurt, and his formula is milk based too. Whatever the issue is it's something that's just in milk and not the other forms of dairy. When we tried again this time, instead of giving him homo milk we tried 2% milk which is supposedly a little easier to digest, not to mention the kid is a good eater and really doesn't need to extra calories anyway.

We started off by adding half an ounce of milk to his 3.5 ounce formula bottle for a few days and waited to see if there was any issue... so far so good! We slowly upped the amount of milk and decreased the amount of formula over a period of a few weeks until he was having a full milk bottle with no formula. It was such a huge relief to see his body accepting the milk ok with no reactions and to finally be done with formula (for this baby anyway!). Getting rid of the bottles altogether... well that's a story for another day! 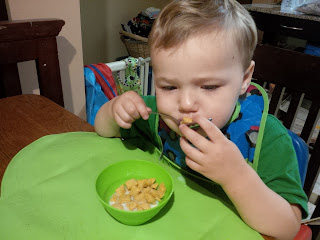 Here's the boy-o having his first ever bowl of cereal with milk in it at 2 years old! He was pretty excited about it, and really enjoyed trying to slurp it off his spoon. It's been a miserable journey having to avoid milk and milk products like creamy sauces and ice cream, but thankfully that journey has come to an end. Hopefully baby #2 won't have the same issues, but if they do, this time around we'll be a little better equipped to handle it!