It was really hot and humid here last week, so we decided to try out some fun water play. Rather than just splashing around in a water table (which is totally lots of fun on it's own!) I decided to try shaking things up a little bit and I pre-made some coloured ice cubes to add to our water bin. Basically I just put a few drops of food colouring into each section of the ice cube tray and then filled it with water and gave each section a little stir before popping it into the freezer. 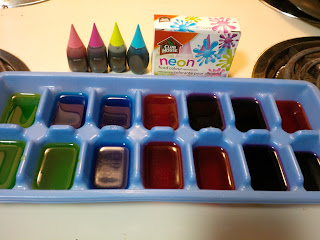 After it was fully frozen I had a lovely rainbow of ice cubes to add into the water bin. The result was really neat as the ice cubes melted and the colour started to swirl into the water. The boy-o had fun adding new coloured cubes to the mix and it was a great way to cool off too! 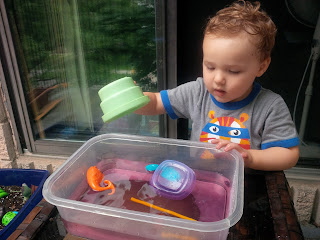 He loved trying to scoop up the ice cubes and "catch" them with his containers as they were melting. Since they cubes are coloured with food colouring be prepared to end up with coloured fingers as well if your little wants to touch them and play with them as they melt in the water. 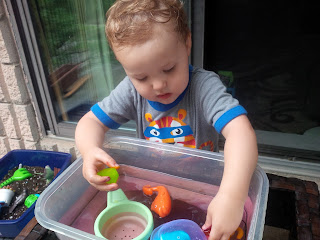 We took turns adding different coloured cubes to see how they changed the water colour, and put the unused cubes back in the freezer for another day of play! 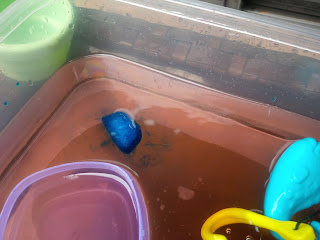 Watching the colour disperse across the water as the ice cubes melted was really cool and the next time we try this out I think we'll add a whole bunch of one colour and try not to touch them for a few seconds so we can really see the colour spread. 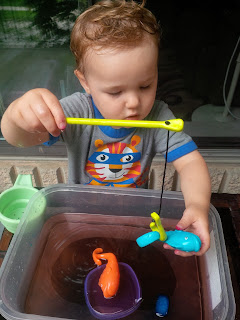 The boy-o had a great time playing at his little water station to try and beat the heat, and the addition of the coloured cubes added a little bit of extra fun. It's definitely a fun and simple activity that we'll be trying again another day.