This was the boy-o's 1st Christmas and he was spoiled accordingly so! In fact we're drowning in toys over here (really, we're drowning in MEGA Blocks alone!). Of all the toys he received though there are certainly some favourites that stand out from the rest. So here's a look at our Top Toy Run Down from Christmas 2013!

1. Baby Einstein Jolly Jumper: This was a gift from my parents which we specifically requested and the boy-o LOVES to bounce around in it and play with the toys. It takes the entertainment of an Exersaucer to a whole new level! It also has some buttons you can push to make music or educational sounds like colours and shapes. There are extra fabric hooks to add on more of your own toys as well. But possibly the best part about it is that is has 5 height settings! For a mama with a tall boy this is super important!!

2. Laugh and Learn Crawl Around Car: This was a gift from hubby's parents and was also specifically requested. I think it's probably safe to say that this was his favourite Christmas gift! There is so much to do with this car. You can turn on the sound for music, sound effects and songs when they push the buttons on the dash board etc., or you can turn it off and still play with the shape sorter on the one door, the ball chute on the other door, the spin wheel at the back, turn the gas tank, or spin the back wheels! One door actually opens up so your kiddo can crawl in and out and it's sturdy enough to pull up on when trying to stand. WIN!

3. Tobbles Neo: The boy-o got these as a gift from his Aunt and Uncle, and although he doesn't understand how to "stack" yet, he loves knocking over the tower when I build it, and he's fascinated with how they spin since the bottoms are weighted. They're also nice and brightly coloured which helps to keep his attention. I don't remember what the actual age rating on them is, but my 8 month old loves them! 4. Darth Tater/Spud Trooper/R2 Potatoo Head: This was another gift from my parents that was meant almost as much for my husband as it was for the boy-o! He's too young to play with it yet, but this was a big hit with the adults. Ha! I'm sure once he gets older he'll love it since I've never met a toddler who didn't like Mr. Potato Head. The set comes with three Star Wars themed potato heads and stores nicely in the large Darth Tader plastic tub. 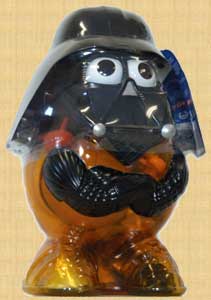 5. Plush Airplane Rocker: This was a gift from hubby and I and the boy-o seems to really enjoy it! It's certainly more $$ than I think it's worth, but we waited for Boxing Day sales to buy it half priced and that I can totally get behind! Like most rockers he needs a lot of assistance to use it, but he loves rocking back and forth on it and since it's all soft and plush there's no worries of him face planting on the front of it from vigorous rocking. So now we have a car and plane... we just need a train! 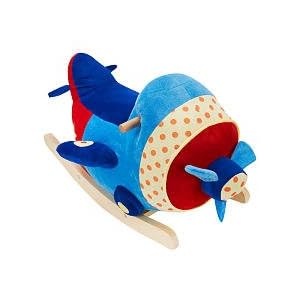 So those were the top 5 Christmas Toys in our household. What were your kids favourite toys this year, and how old are they? The real test of time will be to see which toys still hold his attention a few months from now. We have so many toys we need to start storing stuff away so we can rotate it out and keep things new and exciting for him!